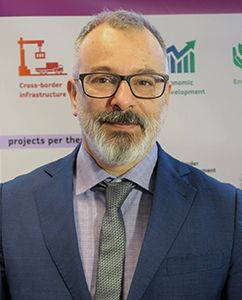 Born in Tenerife, Carlos initiated university studies of Veterinary Medicine and ended up graduating in Political Science and Sociology (Masters Degree). He has been professionally involved in cross-border cooperation initiatives since 1999. Starting with a traineeship at DG REGIO, he has worked both at programme and project level, in Rome and Vienna, until 2008, when he joined the ENPI CBC community through his participation in the INTERACT ENPI project, of which he became Team Leader in 2012. Having lived in Italy for nearly a decade now, Italian is gradually becoming a second mother language. He also speaks fluent English and French. Passionate about cinema and literature, he is the editor of a literary magazine, and writes short stories and scripts whenever he has some free time. 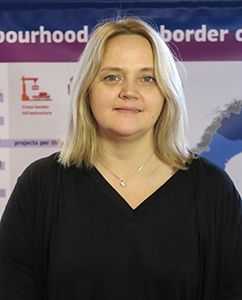 Iveta has studied the German and English languages as well as entrepreneurship and innovation. After her graduation in 1998, she started with project implementation work in her native town, continued with the implementation of international projects at regional level and with programming and implementation of pre-structural funds on the national level in Latvia. From 2004, she has been working with cooperation across borders, first in the secretariat of the Baltic Sea Region Programme and later in the Estonia-Latvia-Russia ENPI CBC Programme. In 2012 she joined the INTERACT ENPI team providing technical assistance to ENPI/ENI CBC programmes and now continues as part of the TESIM project. Iveta is fluent in Latvian, Russian, English and German. Outside of work, her interests lie in the field of psychology and personal growth. 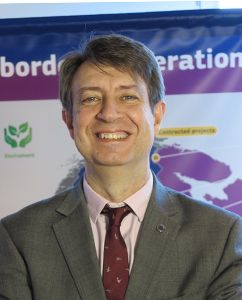 Born in Barcelona, Albert has a degree and master’s degree in Business Administration by ESADE (Barcelona). He started his professional career as an auditor, but he has been professionally involved in cross-border cooperation initiatives since 1997. Starting with technical assistance to DG REGIO, he has also worked as an expert for the LIFE unit in DG ENV, as well as for numerous projects financed by INTERREG, LIFE, ERDF and Culture 2000. He joined the ENPI CBC community in 2007 through his participation in the Regional Capacity Building project (RCBI), followed by the Support to Programme Programming (SPP) in 2013. His mother language is Catalan, with excellent knowledge of Spanish. He also speaks fluent English, French, Italian and Portuguese and is currently studying Russian. He is married and has a son and a daughter, with whom he shares a passion for music, literature and cooking.

Born in Sicily, Rosario studied etho-anthropology in Rome where, in 1994, started his professional career as associated researcher at the CENSIS Foundation, by carrying and coordinating several research projects on immigration, crime and youth related issues. Since 2000, Rosario worked as independent consultant with the EC, the Italian Cooperation, IFAD and several UN organisations. With the EC, from 2000 to 2004 contributed to the first phases of the Result Oriented Monitoring (ROM) into the ACP region in the field of the international cooperation and humanitarian aid. Returned to Sicily after 25 years with his wife and three sons, in 2014 Rosario entered into the ENI/ENPI family as head of the joint technical secretariat for the Italy-Tunisia Programme in Palermo. He started his collaboration with TESIM at the end of 2019. Rosario speaks Italian, English and French and, since 2010, is co-founder in Sicily of an incubator for social innovation and enterprise. 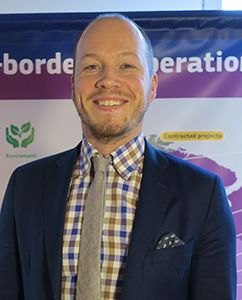 Edmunds was born in Daugavpils, Latvia and is currently residing in Gdynia, Poland. He has been working with the European cooperation (both ENPI and INTERREG) programmes and projects since 2008. His main focus is the financial and audit aspects of the programme and project implementation. A graduate of Riga Technical University with Master’s degree in organisational management and finances, Edmunds was auditing INTERREG and ENPI programmes in the capacity of Deputy Director of Audit Department of the Latvian Ministry of Regional Development and Local Governments from 2008 to 2010. Since 2010 he was involved in day-to-day programme management as a project manager in the Latvia-Lithuania CBC Programme and as a programme expert in the Interreg South Baltic Programme and joined TESIM in 2016. Edmunds speaks Latvian, English, Russian and Polish. He is father of two and, whenever free time allows, Edmunds enjoys playing guitar and piano. 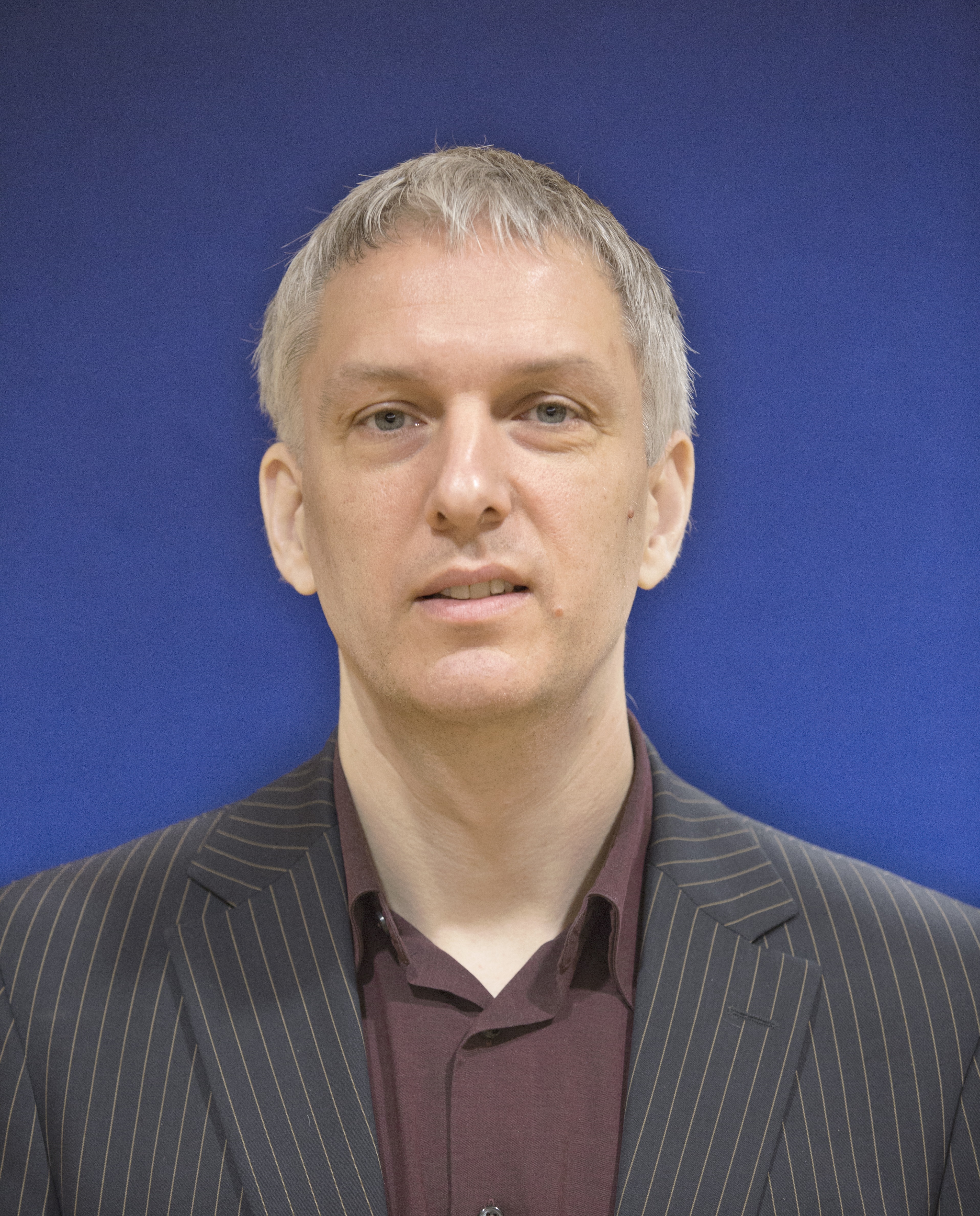 Klaas-Jan is a regional economist from the Netherlands. He has had a keen interest in analysis of all kinds ever since he started at age 20 teaching statistics to first-year students at Erasmus University Rotterdam. After a brief episode as a policy official at the Ministry of Economic Affairs in The Hague, he went on to become an evaluator of a long list of EU programmes (mainstream Structural Funds, Interreg, EN(P)I, IPA, Phare, Transition Facility, External Border Fund etc). An early evaluation of Phare-CBC in 1997-1998 triggered his affection for cross-border cooperation and KJ has been working in this field, among others as member of the RCBI, SPP and TESIM teams (all providing TA to EN(P)I-CBC) since 2006. From 2002-2017, Klaas-Jan lived in and operated from Tallinn, Estonia, and he is fluent in Estonian. The last couple of years, he has invested in new knowledge and skills in the fields of knowledge management and organisational psychology. 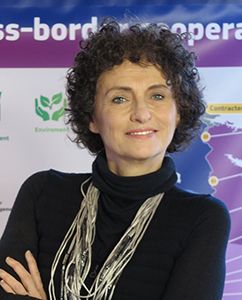 A Political Science degree, a master in Constitutional Law, Daniela is a Florentine journalist trained in print and audio-visual reporting/production. In 1997, after 10 years as a print journalist, she left her newspaper desk to move to Bosnia. Since then, she has been covering emergency and development cooperation programmes working as Communication Expert for the European Commission in the Balkans (based in Sarajevo and Belgrade), in North Africa (based in Tunis) and the Middle East (based in Amman, Jordan). Thirteen years – and 3 kids – after, she moved back to Florence, from where she is now engaged in training and consultancies for EU funded projects. She met the CBC world in 2018, and it was love at first sight. Daniela is fluent in English, French, Spanish and Serbo-Croatian.  She loves singing in her Gospel choir. 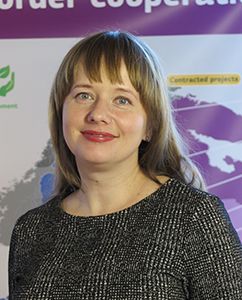 Born in Ukraine, Tetiana received a Master’s Degree in Accounting and Audit, a Ph.D. in Taxation, and a D.Sc. in Public Finance. She started her professional career as an accountant, later developing into being an auditor and forensic expert. Tetiana’s main areas of academic research are in the fields of public finance and government effectiveness. As an auditor, she was involved in projects funded by major international donors such as the Global Fund, Swedish International Development Cooperation Agency, USAID, Renovabis, and others. She started working for ENPI CBC in 2017 as a CCP expert. She is fluent in Ukrainian, Russian, English, and German, plus speaks Polish and Czech, and is currently studying Spanish. Tetiana is interested in traveling, studying foreign languages and cultures, literature, and journalism. 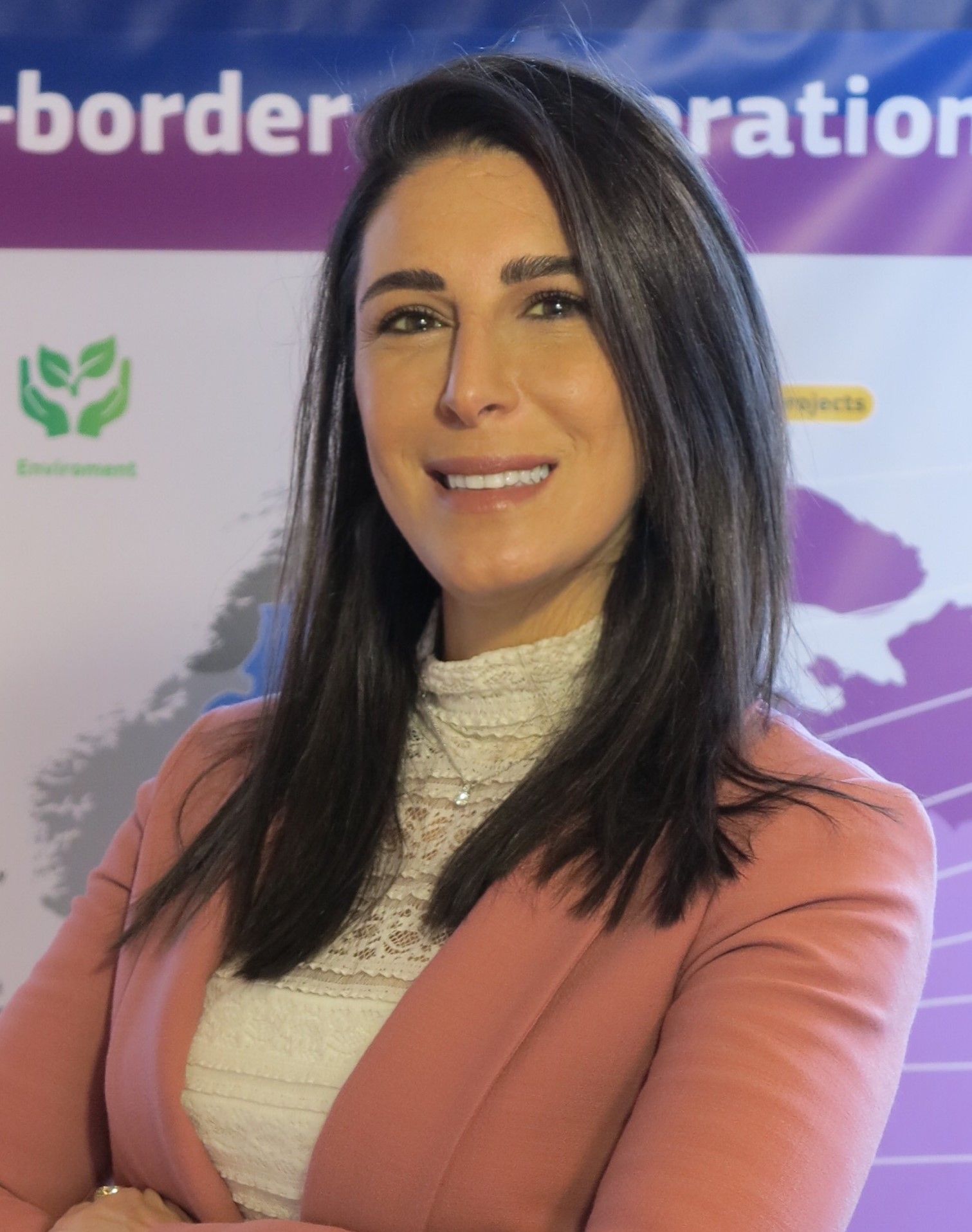 Diana was born and raised in Lebanon, prior to moving to Barcelona where she started her career as a project officer at the Association of Mediterranean Chambers of Commerce (ASCAME) formulating and developing project concepts to acquire funds from various international donors. She has extensive experience in the Euro-Med region working on EU funded projects where she has successfully identified and developed strategic partnerships on the local & regional levels, tailored solutions to particular challenges facing public-private partnerships, managed and implemented various development projects. Diana has worked directly with governments, trade & commerce professionals, private institutions and NGOs towards the efficient completion of projects and policy reforms. Diana holds a Bachelor Degree in Political Studies from the American University of Beirut (AUB), and a Master’s Degree in Human Resource Management from the University of Leeds (United Kingdom). Diana speaks fluent Arabic, English, French and Spanish. Outside of her work with TESIM, Diana manages her own startup offering tailor-made high-end packages prepared using olive oil based products. The brand focuses on employing and engaging vulnerable and unprivileged communities to empower them and contribute to improving their livelihoods and living conditions. 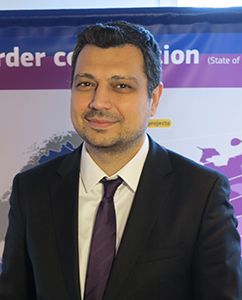 Born in Izmir, Turkey, Akturk holds a bachelor’s degree in International Relations from Colby College Waterville, USA and Master’s degree in Management from Hacettepe University in Ankara, Turkey. Previously, he has completed the International Baccalaureate Programme at Waterford Kamhlaba United World College of Southern Africa in the Kingdom of Eswatini. He started his career as a researcher in a think tank, was later assigned as an elections observer in Iraq. He has worked as a research expert in a migration project in Turkey and currently he continues to work as a senior expert / consultant in several EU funded Programmes for more than a decade. Akturk joined the TESIM team in 2016. 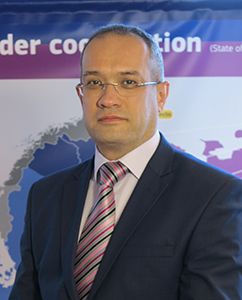 Born in Armenia, Ruben  has acquired a MSc in International Relations and in Economics. He has around 10 years of working experience within the Government of Armenia in the positions related to coordination of donor assistance to Armenia, sustainable economic development, planning and analysis of economic policy, promotion of foreign trade and investments. He has more than 7 years of direct experience working on projects financed by the EU and other donor organisations. Ruben is fluent in Armenian, English and Russian, has some knowledge of German. He has a wife and two children, with whom he shares his passion for travelling and new cultures. Ruben enjoys  cooking and comes up with original recipes whenever he has some free time. 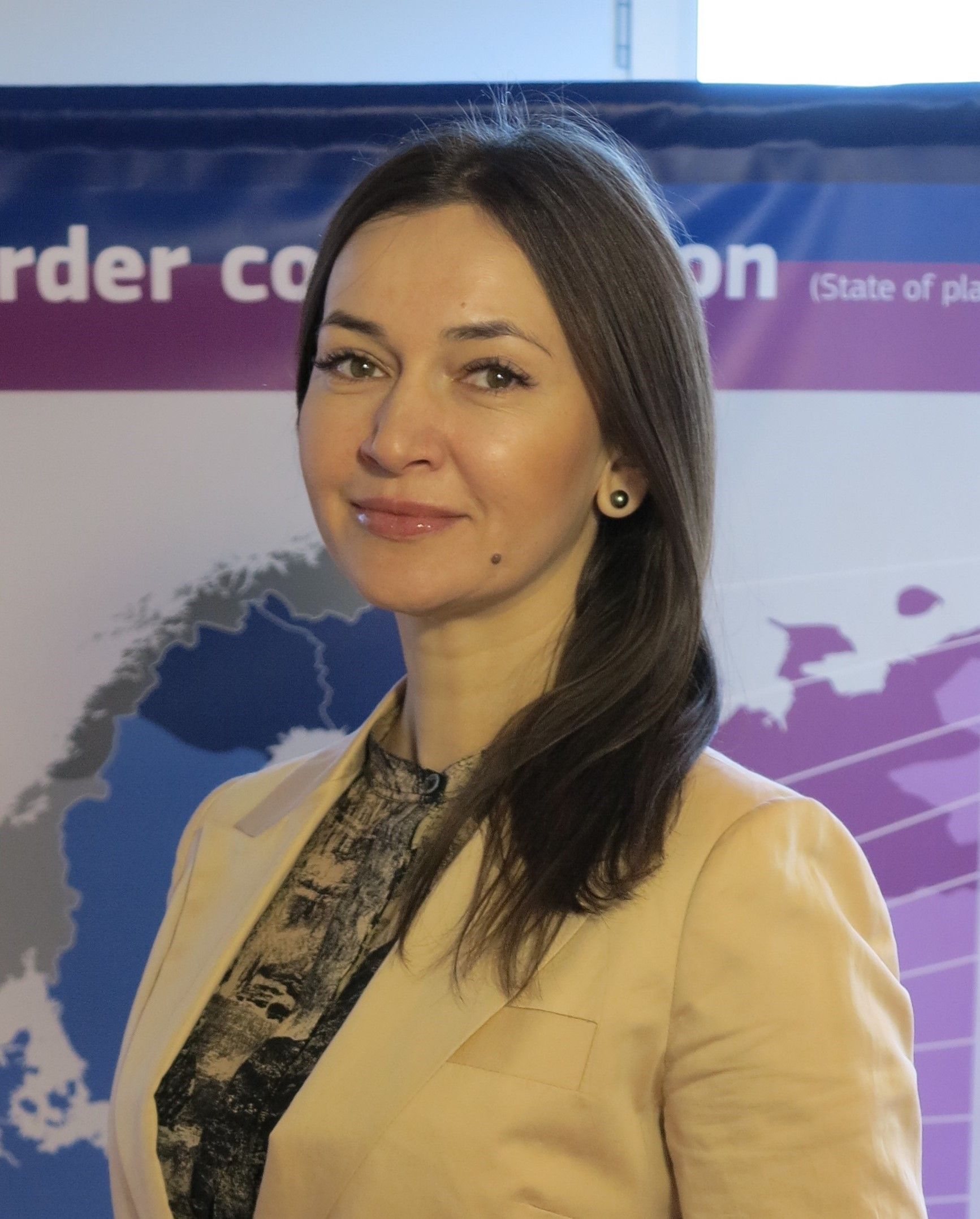 Born in Moldova, Aurelia graduated in International Law and did a Master in International Economic Relations. She started working in the Ministry of Economy of Moldova in 2000, being involved in the first  EU CBC programmes. She has more than 19 years of general experience in programming, project/programme management, implementation, monitoring and evaluation particularly of EU assistance. During the period of working in different institutions, she was in different roles of project cycle management: National Coordinator of Programmes, Member of Joint Monitoring Committees, Evaluator, National Contact Point, Trainer, Beneficiary and Project Manager. Aurelia is fluent in Romanian, English and Russian, having some knowledge of French. She has  also started learning Italian. Passionate about traveling around the world, she is very curious to know as much as possible about different cultures and traditions and how communication between people influence their history and quality of life. 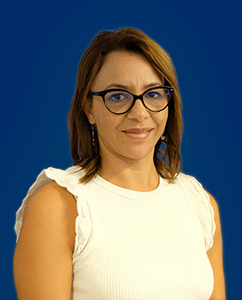 Born in Tunisia, Raja holds a bachelor’s degree in management and a Master’s degree from the National School of Administration (ENA – Tunisia). She started working in the Ministry of Development and International Cooperation of Tunisia in 2003 involved in programming, implementation, monitoring and evaluation of several EU-funded programmes. Through her 17 years of experience, she was supporting directly government and civil society to set up public policies and strategies and tailor solutions to particular challenges. She has an extensive experience in the Euro-Mediterranean region managing and developing project concepts on a wide range of fields; economic, social, media, civil society, human rights, elections, etc. Raja was involved in the first EU CBC programmes in 2006 as member of the NA, then as external assessor for the programmes MSB and Italy-Tunisia. She joined TESIM in 2019. Raja is a civil society activist leading with a group of youth volunteers a network of national election observers in Tunisia.

For more information or questions, please write to info@tesim-cbc.eu