This year will bring new exciting experiences to the ENI CBC community. It will introduce a wealth of new protagonists on both sides of the EU external borders who work together to make cross-border cooperation tangible. At this pivotal moment, we commit ourselves to make you know a bit better who are the ENI CBC actors and their first achievements.

New initiatives for a positive change

Since the time of our last bulletin the ENI CBC community has given a warm welcome to a number of new beneficiaries. During the months of December and January, grant-award decisions were taken in five ENI CBC programmes. 93 projects worth of more than €136 million of programme (EU and national) funding will be implemented in various fields, ranging from business and SME development to environmental protection: 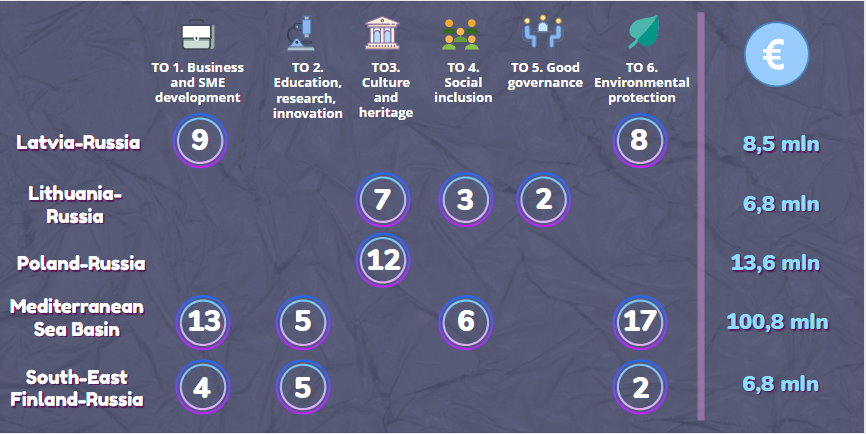 The ongoing contracting procedures constantly increase the number of projects under implementation which at the moment has come up to a total of 159. A full overview of the running projects will be available soon.

Alongside with the contracting, the programmes direct their attention to capacity building of the project beneficiaries. A recent example is a series of seminars on financial management and procurement organised by Latvia-Lithuania-Belarus in December, January and February on the programme territory.

Closer to the target

The applicants of the closed call for proposals need to arm themselves with a bit more patience before the final decision. However, some details of the selection procedures are already available.

33 (out of 61) concept notes submitted to the last call for proposals of Karelia passed to the second phase, which started on 8 January. The applicants of the selected concept notes were invited to submit full application forms until 12 March.

One step closer to announcing the results of the 2nd restricted call is Estonia-Russia. On 20 February, the Selection Committee of the programme will kick off the quality assessment procedure for the 3 full application forms submitted by the deadline of 12 December 2018. The decision on the selected projects is expected late in May.

By a curious coincidence, around the same dates another Project Selection Committee, this time that of Italy-Tunisia, will close the quality assessment of the proposals submitted to the 1st call of the programme. The project beneficiaries will be announced at the Joint Monitoring Committee meeting which will take place a few weeks later, in the beginning of March.

In the beginning of January, the first step of evaluation was finalised as well for the HARD projects submitted to the 1st call of Romania-Ukraine. The administrative and eligibility check was successful for 35 infrastructure projects, which will undergo the technical and financial evaluation. The final phase foresees submission of the technical documentation by the selected applicants.

An administrative and eligibility check is underway for 64 applications submitted to the 3rd call for proposals of Kolarctic by the deadline of 21 December 2018. The final decision on the call’s outcomes will be taken during the Joint Monitoring Committee meeting of the programme which will take place on 11-12 April.

A recently closed 2nd call for proposals of Black Sea Basin demonstrated a high interest in cooperation among its applicants, resulting in 247 applications submitted. More than €200 million of ENI funds were requested by the applicants to support business and entrepreneurship, enhance trade and agriculture, improve environmental monitoring and reduce marine litter in the Black Sea Basin.

When one call closes another opens…

Slightly interpreting Alexander Graham Bell’s famous quote, we have in mind the new funding opportunities just opened to Lithuania-Russia potential applicants. The second call of the programme, with a budget of €15 million, was launched on 1 February (deadline 17 April). The call encourages joint initiatives in the fields of tourism and culture, health care, education and social inclusion, local and regional good governance and border-crossing management. The programme will support Russian and Lithuanian potential applicants through the information seminars in Kaliningrad (RU) on 13 February and in Gabšiai (LT) on 20 February.

Four capacity building workshops ensured the preparation of good quality proposals for the applicants to South-East Finland – Russia fifth round of a call (deadline on 27 March). The workshops have taken place on the programme territory between 29 January and 7 February.

Enjoying wide renown among the applicants, beneficiaries and key stakeholders, the ENI CBC programmes successfully reach out to new audiences.

On 24-25 January, Poland-Belarus-Ukraine discussed the role of cross-border cooperation for border regions and showcased its achievements during the 12th Europe-Ukraine Forum and 3rd Eastern Fair in Jasionka (PL), which hosted over 800 participants from Poland, Ukraine and other EU and Eastern Partnership countries, including government members, politicians, businessmen, regional officials, representatives of international organisations and think tanks.

Latvia-Lithuania-Belarus brings a colourful continuation of its EC Day initiative closer to the citizens of the cross-border regions, and not only. In January the travelling exhibition “Painting our future together” presented to the Latvian public the artworks of 10 international artists who interpreted on canvas their vision of cross-border cooperation. Until 23 February, the exhibition invites Belarusian art-lovers to Minsk. Shortly after it will move to Lithuania (Vilnius) and then to Belgium (Brussels).

Indeed, the ENI CBC community is teeming with updates and interesting initiatives. Don’t miss your chance to have all ENI CBC news in one place – subscribe to our monthly e-bulletin! And, of course, don’t forget to like and follow us on Facebook and Twitter to keep up.