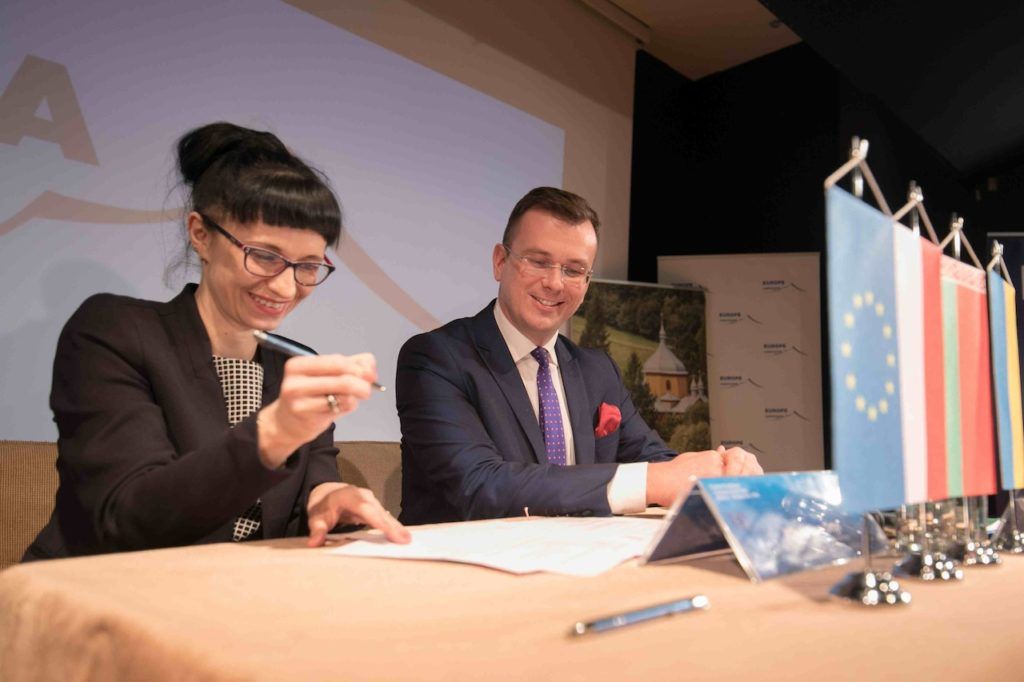 Last winter month brought a positive outcome to Poland-Belarus-Ukraine: one more grant contract under the thematic objective “Heritage” was signed in Przemyśl on 17 February. The total EU contribution of the seven grant contracts signed so far amounts to 13,2 million euros. The programme has already selected projects in several priorities but it is not resting on its oars: the Joint Monitoring Committee will meet on 22 and 23 March in Białystok to approve projects selected for co-financing under the thematic objective “Security”.

A step closer to project implementation was also made by Estonia-Russia. It has started the selection procedure for 39 full application forms submitted to the second step of the first call for proposals by the deadline of 14 February 2018. Out of 42 pre-selected concept notes, 39 were submitted as full application forms requesting a total grant of 15,2 million euros. The final decision by the Joint Monitoring Committee is expected by the end of June 2018. Meanwhile, the time has almost run out for those applying to the second call for proposals of the programme dedicated to the thematic objective “Environment” –  the call closes on 7 March 2018!

Congratulations to Latvia-Lithuania-Belarus for the 156 project proposals received in the second call closed on 22 February. The proposals request an impressive amount of 109,2 million euros which exceeds four times the allocation available for this call. We will come back with more statistics about the call results in our next bulletin.

On 28 February and 1 March the Project Selection Task Force for Latvia-Russia  met to discuss the concept notes submitted to the first step of the call and recommend the best ones for the second step. The day after, the Joint Monitoring Committee meeting took the final decision on the concept notes and brought good news to 20 applicants who will now be invited to submit full application forms by 31 July 2018. The meeting was focused as well on the launch of the second targeted call for proposals for joint actions in environmental management (priority 2.2.) which will be announced in April. And we will be glad to provide more information about it our next bulletins.

While some ENI CBC programmes hold in their hands concrete results, other are working hard to gain them.

Nine capacity building sessions on project proposal development and application procedures are scheduled for March by Romania-Ukraine throughout the programme area in support of its open calls for proposals (soft and hard projects). Additional promotion to the current calls will be made at the Congress of project initiatives Romania-Ukraine which will take place in Odessa on 16 March 2018. The calls will remain open until 3 May 2018.

On 14 March 2018, the Romania-Republic of Moldova programme will organise a partnership forum in Chisinau, Moldova aimed at promotion of its open calls for proposals for soft and hard projects (deadline 7 May 2018). The event, targeting potential beneficiaries from the two participating countries, aims at facilitating partnerships and applying for programme funding. Meanwhile, a number of training sessions are underway during the months of March and April.

The 3rd call and the 4th rounds of call for proposals are open in South-East Finland – Russia with the deadlines for project proposals submission on 28 March 2018 and 15 June 2018 respectively. On the promotional end, 155 participants attended four lead applicant workshops on application procedures, updates and evaluation processes of the open calls that were organised in Russia and Finland in late February.

In conclusion, opportunities not to be missed for potential applicants interested in applying to Lithuania-Russia open call for proposals (deadline 10 April 2018): four regional workshops will take place in Lithuania and Russia in March. The events will cover eligibility rules, application procedures and project implementation. Registration to the events is open on the programme website. More support to applicants and beneficiaries is provided by the guidelines which are now available in all national languages.

Winter gradually gives place to spring. And we assure you that in spring the ENI CBC community will bloom with new opportunities, events and achievements. And we are semper paratus to spot the latest news and share them with you! Stay tuned to our website and social media channels (Twitter, Facebook and YouTube).