During the month of April, a final recap on the now stable version of the draft Interreg Regulation has taken place thanks to a series of events organised by Interact and by TESIM. An intense recap indeed, starting from the requirements which are common to the full Interreg family, moving to those which apply specifically to all external cooperation programmes and ending only this week with a practical workshop on what’s new for our Interreg NEXT community. Let’s take a look at the final event of the series and learn about the opinions from practitioners on the changes that the new regulatory framework brings in comparison to ENI CBC.

A single regulation for all Interreg programmes, simplification as leading aim, enhanced harmonisation while keeping specificities, in particular for what concerns external cooperation: after nearly three years from the issuing of the Commission proposals for the regulatory framework applying to Interreg 2021-2027, we head steadily towards the end of a process that will see the texts, which are now stable, being adopted latest in July.

It’s certainly been a long but fruitful process, with the negotiations in the Trilogue being topped with numerous exchanges among practitioners in order to identify and understand the novelties, big and small. Along the way, many fora have been put at disposal for these exchanges, and by now the number of clarifications exceeds the remaining doubts. The time is therefore ripe to know how the programmes will put this wealth of information in practice. And this is what TESIM has proposed this week to the representatives of Interreg NEXT programmes that attended the practical workshop “What’s new for Interreg NEXT?”. Two were the key topics covered in the agenda: the future governance of the programmes and the basic principles of their financial management. 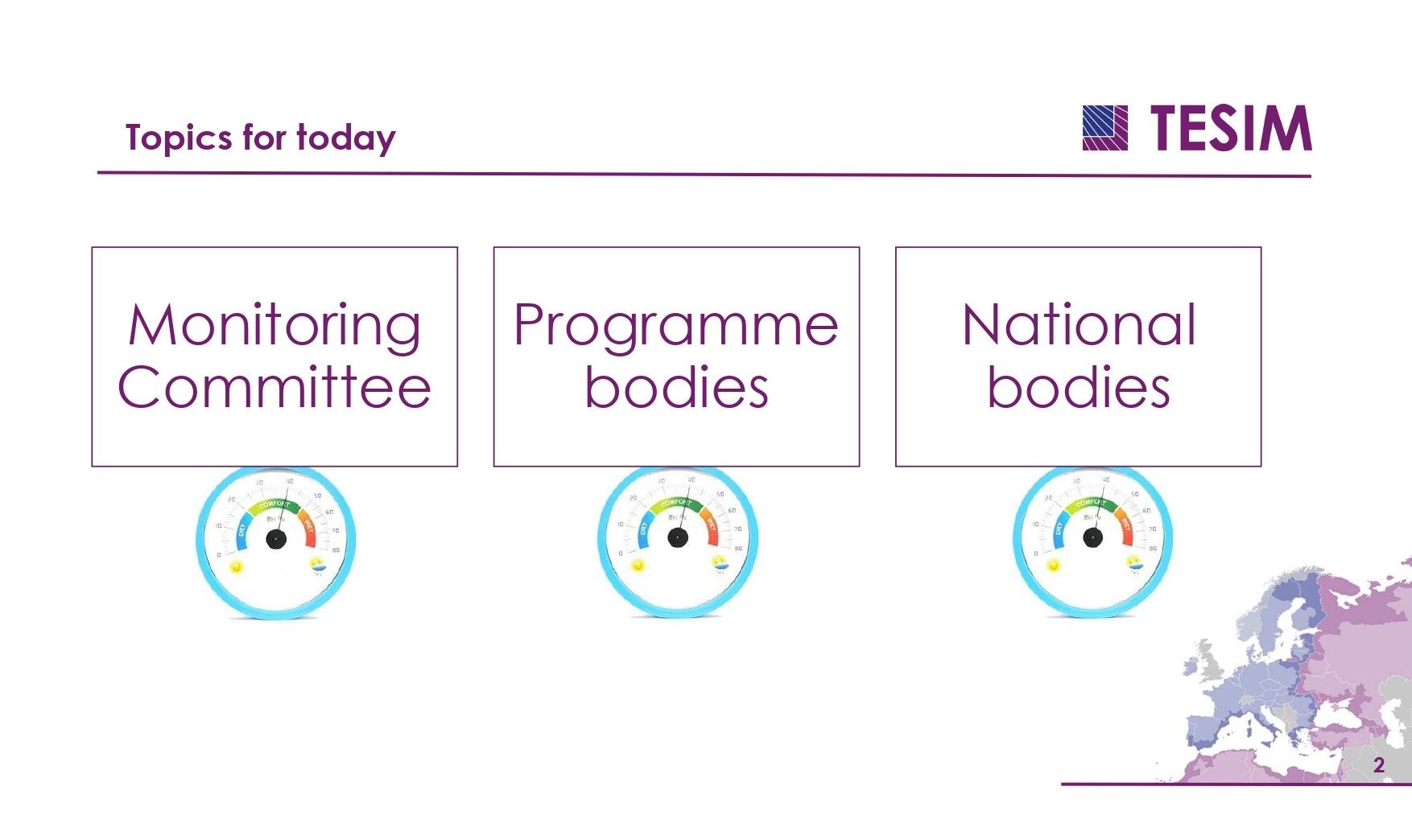 For what concerns the governance, the main novelties compared to ENI CBC in terms of programme bodies are the obligation to set a Joint Secretariat, the different role of the national counterparts of the Managing Authority and the adoption of the partnership principle at the highest governance level, this is, the Monitoring Committee. The first issue does not pose major implications to our community, in which Secretariats exist already for most programmes even if under different settings. In fact, the outcomes of the discussions show a preference for keeping the current status quo when it comes to the division of functions between the Managing Authority, the Secretariat and the Branch offices, simply readjusting structures in order to address the new requirements. Further reflections are needed in most programmes on the degree of adjustment though, something that will certainly be addressed in the numerous Joint Programming Committee meetings scheduled to take place in the coming months.

The different role of the national counterparts to the Managing Authorities brings instead a certain discontinuation with the practice of the current period. The question at stake is whether this discontinuation is just a matter or labelling or if it represents something more. In fact, while the regulation refers to “contact points”, all programmes tend to agree on the need of keeping a figure closer to the current notion of “National Authority”, with functions largely exceeding those of communication nature. In fact, the contact points foreseen in the regulation are seen for the future as a potential collector of the tasks being currently carried out not only by the ENI CBC National Authorities, but also to a large extent those of the Control Contact Points. As some participants to the workshop put it, “it is not about the name but about the functions”, and as long as the regulations allow for it – which is the case – having contact points with reinforced functions seems the proper way ahead to ensure continuity.

Last point in this section, the practical adoption of the partnership principle at the level of the Monitoring Committees is yet to be explored, in particular for multi-country programmes, which need to ensure that – while respecting the principle – the composition of the Committees remains within manageable numbers. 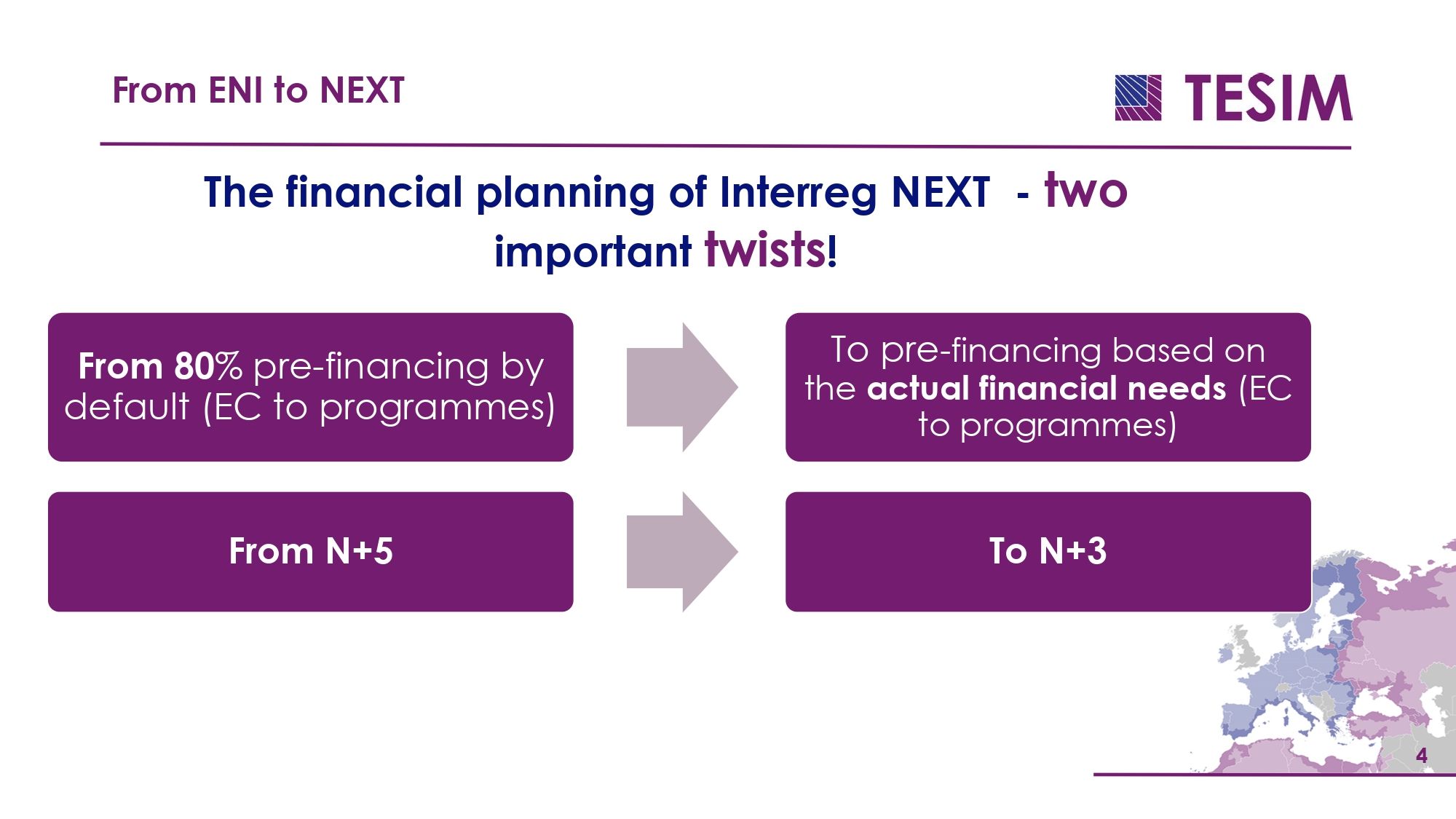 Financial management is a composite process, and it is not possible to cover all its pieces within a short practical workshop. Where to put the focus? As a start, programmes were reminded about the need to ensure a proper financial planning for the next programming period.

While the pre-financing system fortunately will remain, the shift from an N+5 to an N+3 regime brings the need for improving performance right from the onset if programmes do not want to face financial losses due to decommitment. Simplifications, in particular for what concerns the management of technical assistance, are also an important feature of the new regulation. But, linked to the previous point, this comes with an important twist, which is the need for programmes to ensure the highest possible absorption of funds by projects, something that can be certainly enhanced improving internal mechanisms, but that also depends on external factors, as we have well experienced these years. In the group discussions, one aspect that has been identified as a “hot topic” for the future are the increased financial responsibilities of the participating countries, in particular Partner Countries, which will also be liable for the recoveries from private beneficiaries. Safety nets have been identified by certain programmes already in this period, without hindering the participation of private institutions at project level, but it remains to be seen which approach will be followed in the future. The need for a coordinated approach for countries participating in more than one programme was also highlighted. Additional exchanges dealt with the new approach to management verifications and the handling of national co-financing for programmes involving the Russian Federation, but we would need an additional article for that!

All in all it was a very fruitful event, with targeted information and lively exchanges, moving from the Q&A setting to hearing the views of the practitioners on such important topics. Even if maybe it was not the most fortunate motto when considering the global situation these days, the event allowed to “measure the temperature” of Interreg NEXT. Proceedings in hand, we can conclude that the temperature is comfortable, very comfortable.

Satisfaction with their current setting, a strong will of continuity, awareness of the regulatory changes and of where challenges may emerge, preparedness for accommodating the novelties. These are the main conclusions of the workshop, all positive, which show once more how the community of new neighbourhood cross-border cooperation programmes is well prepared to become a reality, with fast-runners likely to be adopted already before the end of the year and the rest following gradually until early spring 2022. TESIM’s next endeavour in this respect will be that of increasing awareness on the regulatory changes among Partner Countries, through the organisation of information sessions in the coming months. An interesting subject for the next editions of our bulletin. Stay tuned!