From the Finnish port of HaminaKotka to St. Petersburg in Russia or vice versa for a weekend? And take your car with you too! The year-round ferry boat connection between the two ports will be developed thanks to two large infrastructure projects financed under the South-East Finland – Russia CBC Programme.

With over 200 ports, the Baltic Sea is one of the world’s busiest seas in terms of maritime transportation. The Port of HaminaKotka, the biggest cargo port in Finland, is a key port of the Trans-European Transport Network (TEN-T) along the Core Network Corridor in Scandinavia and the Baltic Sea, with daily connections to all significant oceanic ports in Europe. Just 250 km away, there is the Port of St. Petersburg, the largest port in Russia in terms of passenger traffic, handling over 2 million arrivals annually. Despite the short distance, there is no year-round international ferry connection between them.

HaminaKotka Port lacks of facilities to receive passenger traffic. And its counterpart in St. Petersburg, in its turn, has the opposite problem: it needs specialized equipment to receive cargo vehicles and goods. Limited infrastructure capacities hold back transshipment communication and tourist flows between the two ports, which negatively impacts the economies on both sides of the border.

The Finnish and the Russian partners decided to work together to establish regular year-round ferry connections between Kotka and St.Petersburg and to provide a full range of services to passengers and vehicles arriving by cruise and ferry vessels.

The actual cooperation between the two ports started in December 2015 with the signature of a cooperation agreement. In 2019, the long-term partnership resulted into two mirror large infrastructure projects – “KOTKA PAX” and “Multipass Port” –  supported by the South-East Finland – Russia ENI CBC Programme. The total budgets of these projects exceed 5,8 million EUR, with a CBC funding of more than 4,5 million EUR provided by the European Union, Finland and the Russian Federation. These investments will help to improve seaports border-crossing points and increase cargo and passenger flows between Russia and Finland.

In particular, in the frame of KOTKA PAX project, the Port of HaminaKotka will build a passenger terminal with necessary facilities and equipment for time-saving and secure border control checks, inspections and customs operations.

At the other end of the planned route, the Port of St. Petersburg will increase its terminal area and build more than 20 infrastructure objects, such as weight control areas for cargo vehicles, a building for inspection and clearance of goods, areas for cargo screening and cargo vehicles controls etc. “As a result, the port will be able to process up to 45,000 vehicles per year, including more than 8,000 cargo trucks,” – says Andrei Petrov, Deputy Director on Development of Passenger Port of St. Petersburg, lead beneficiary of the Multipass Port project. Widening the range of accepted vessel types to passenger-cargo ferry boats will increase the port workload beyond a mere tourist “high season”.

“The passengers travelling by the new sea route between the ports of Hamina-Kotka and St. Petersburg will find top-quality high-tech services while crossing the border,”- underlines Mr Markku Koskinen, Director of Traffic Operations in Port of HaminaKotka, lead beneficiary of the KOTKA PAX project. Talking about the long-term results Andrey Petrov says: “Such a unique complex of services will increase the attractiveness of the new facilities for the Russian and Finnish ship-owners, meeting the forecasted demand for the transshipment services for Russian, Finnish and other international export-import and transit cargo companies”. They will benefit from new modern cross-border checkpoint facilities and security systems for cargo vessels controls, with the full range of necessary technical and documentary procedures performed nonstop. In its turn, this will stimulate the growth of the surrounding seaport infrastructure (such as catering, accommodation) and create new jobs for the local citizens. And this is not the only advantage: the ferry connection from HaminaKotka to St. Petersburg will offer an alternative route for road transport which will help to reduce queues at land border-crossing points between Finland and Russia and, in addition, minimize the environmental impact of transport systems. 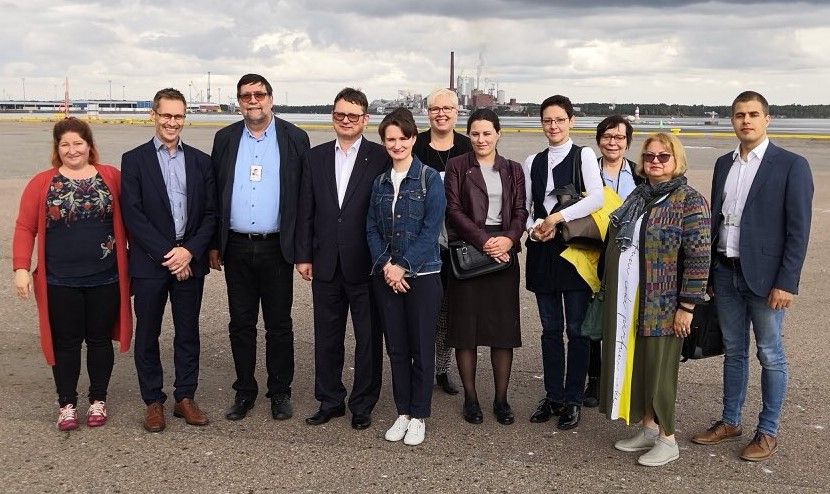 The first steps towards the common goals have been already taken. In August the Port of HaminaKotka hosted the official kick-off meeting of KOTKA PAX project. The project partners discussed practical aspects of project implementation and visited the Kantasatama Harbour, where the new passenger terminal will be built.  The projects will be finalized by 2022.