SUCEAVA – Transport from the border, accommodation and hot meals, translation and counselling services, hauling and distribution of donations, even a solidarity shop: when it comes to the Ukrainian refugees, the Ștefan cel Mare University of Suceava (Romania) has been involved in the crisis from all sides, with all its authority, through all its human resources from the very beginning.  And its links with Ukrainian academia are growing deeper. This public institution – established in 1963 in Suceava, just 50 km away from the Ukrainian border – was among the first to rush into action, and it has quickly become a humanitarian hub for the neighbouring population on the run, even serving as a focal point for UN agencies and non-governmental organisations. Around 500 between students and professors have been offering their time and efforts to mitigate the impact of the conflict on the civilians, and to sustain their colleagues across the border. It was time for the tolerant and participatory atmosphere established in the campus throughout the years to pay off.

“We have scholars from 35 countries – says Mihai Dimian, vice-rector for Scientific Activities and coordinator of the Solidarity Shop Initiative – of which over 100 are Ukrainian, and around 1.200 from the Republic of Moldova: some of them went to volunteer at the borders, many refugees didn’t come directly from Ukraine but escaped to Moldova, and from there they crossed into Romania. We even have Russian ethnics, and they were also helping. It was quite extraordinary to see all these young people working around the clock in very difficult conditions, never complaining about hunger, fatigue, or freezing temperatures. It was something unexpected”. 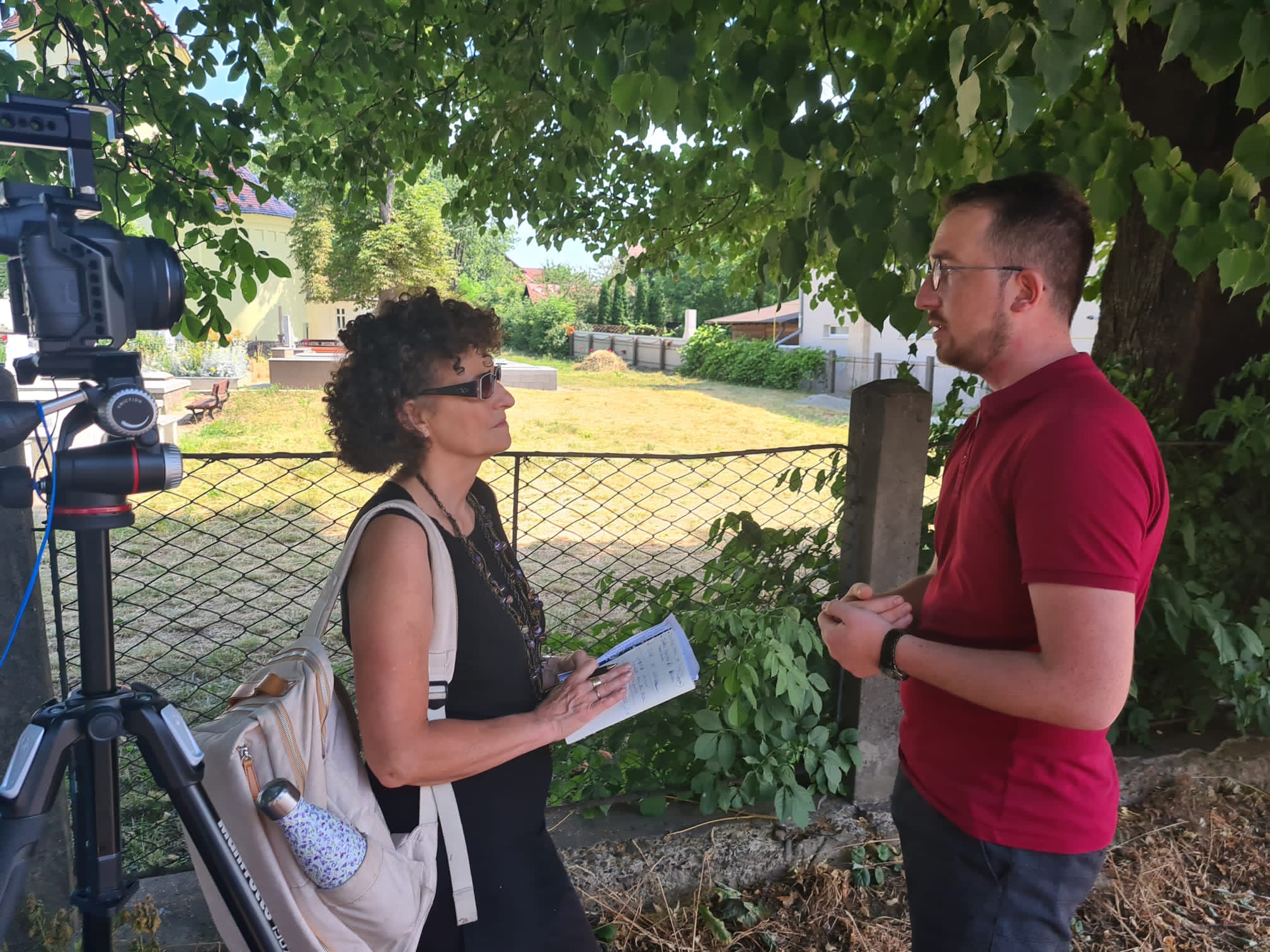 “Yes, it was incredibly cold during the night – remembers Anton, 21 – especially for the kids who arrived, or the disabled people. I was at the border with my fellow students, there were a lot of Romanian volunteers who tried to help, but they did not understand one word of what people were saying, so I jumped in with ‘Hello, I am from Ukraine too, and I am here to help you. You are safe now’”. Anton is from Chernivtsi, he is studying foreign languages at the faculty of Letters, at Stefan cel Mare. He was visiting his family after the February session of exams, and he came back to Suceava on the morning of 23 February: just in time to be on the safe side when the war started the next day. “Many students were home because they finished their exams, and now they are blocked in Ukraine. I have my parents there, my grandparents, and three older brothers in their twenties and thirties. What can I do for them? I keep working as a volunteer, that’s all I can do”. 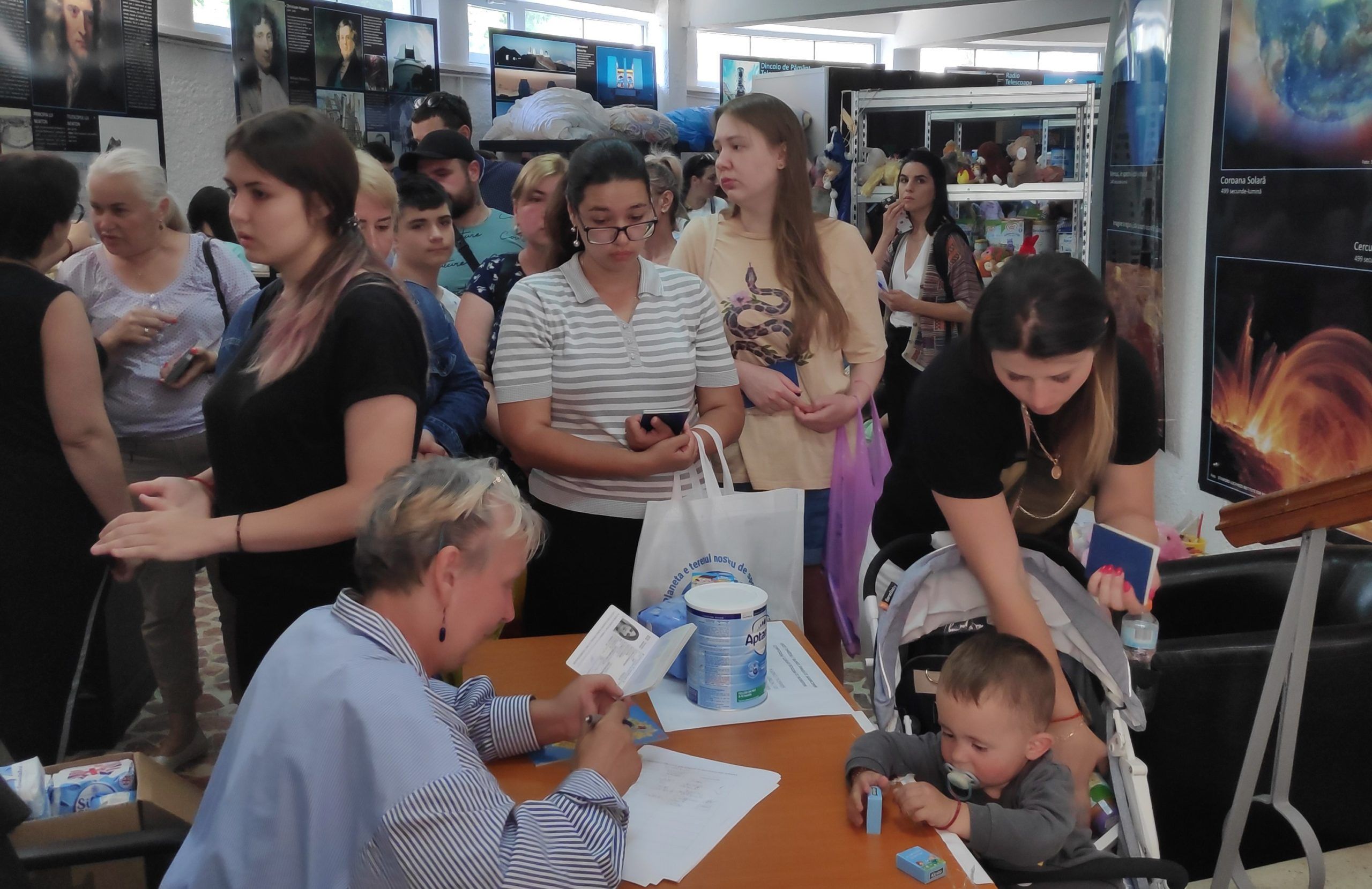 The support machine put in place by the Suceava institution is impressive: more than 10.000 meals and 20.000 nights were offered at the Stefan cel Mare premises or in a hostel rented for this purpose. Refugees were also dispatched to the homes of university staff. “I have five of them staying with me”, continues Mihai. It was mostly to help people outside official hosting centres that the idea of the solidarity shop came to life. “Those who were on their own were not entitled to specific assistance – explains Mihai – so we thought about a place where they could come and collect 10 items a day per family member, for their daily needs”. 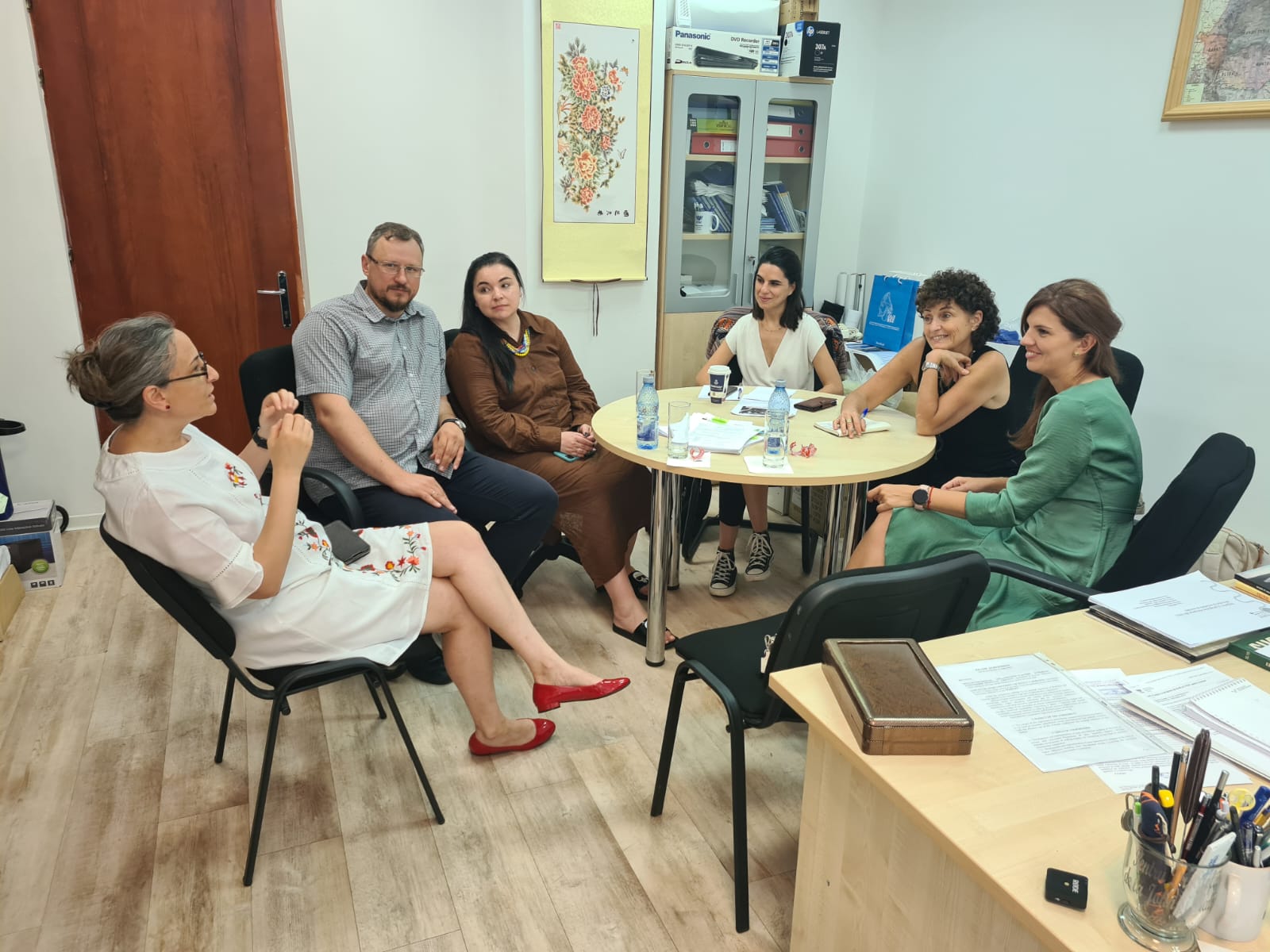 Professors from the Polytechnic of Odessa, or the Chernivtsi University are also hosted by their Romanian counterparts at Suceava. “We came here right away, at the beginning of the war – says Mykhailo Lebid, Head of the Innovation center of the Odessa Polytechnic National University – and now we continue to work together on our project, from here”. The intent of the UNIVER-U project – implemented in the framework of the ENI CBC Romania-Ukraine Programme – is to improve communication and cooperation between students, academic and research staff from Romanian and Ukrainian universities. This was meant to be done through a variety of initiatives and tools, from language to training courses, from summer to winter schools. But COVID stormed the world, and things had to be re-invented, forcing activities towards an online dimension which in the end turned out to be almost functional. “Despite all odds – continues Lebid – I think we communicated more because of the pandemic, even if online; and now we see each other more because of the war”.

“When the aggression started, the University of Ivano-Frankivsk, our Ukrainian partner in the project HE-CROSS, did not stop all activities. They only postponed some of them, especially the training sessions. At that time, we all hoped that it would be just a matter of few months and that we could resume work soon” – recalls Stefan Purici, coordinator of HE-CROSS and vice-rector for International Relations at the University Stefan cel Mare. The project is also part of the ENI CBC Romania-Ukraine Programme: it was designed to highlight the touristic and cultural potential of the Carpathian region, whose richness is not sufficiently known by international audiences. And it intended to do so thanks to the cooperation between the two Universities, by training future specialists in the field of tourism, by filming and 3D scanning the main tourist sites and cultural assets, and by developing other support tools. “In May – continues Purici – after the Cabinet of Ministers of Ukraine allowed the use of European funds for the implementation of projects, I discussed with the partner to quickly complete the remaining purchases and to do everything necessary to finish the activities not directly related to students: processing video footage, scans, etc. Regardless of the war, we are in constant touch with the partner, and the project is in continuous development, adapting to the context. Our will is to keep going”. 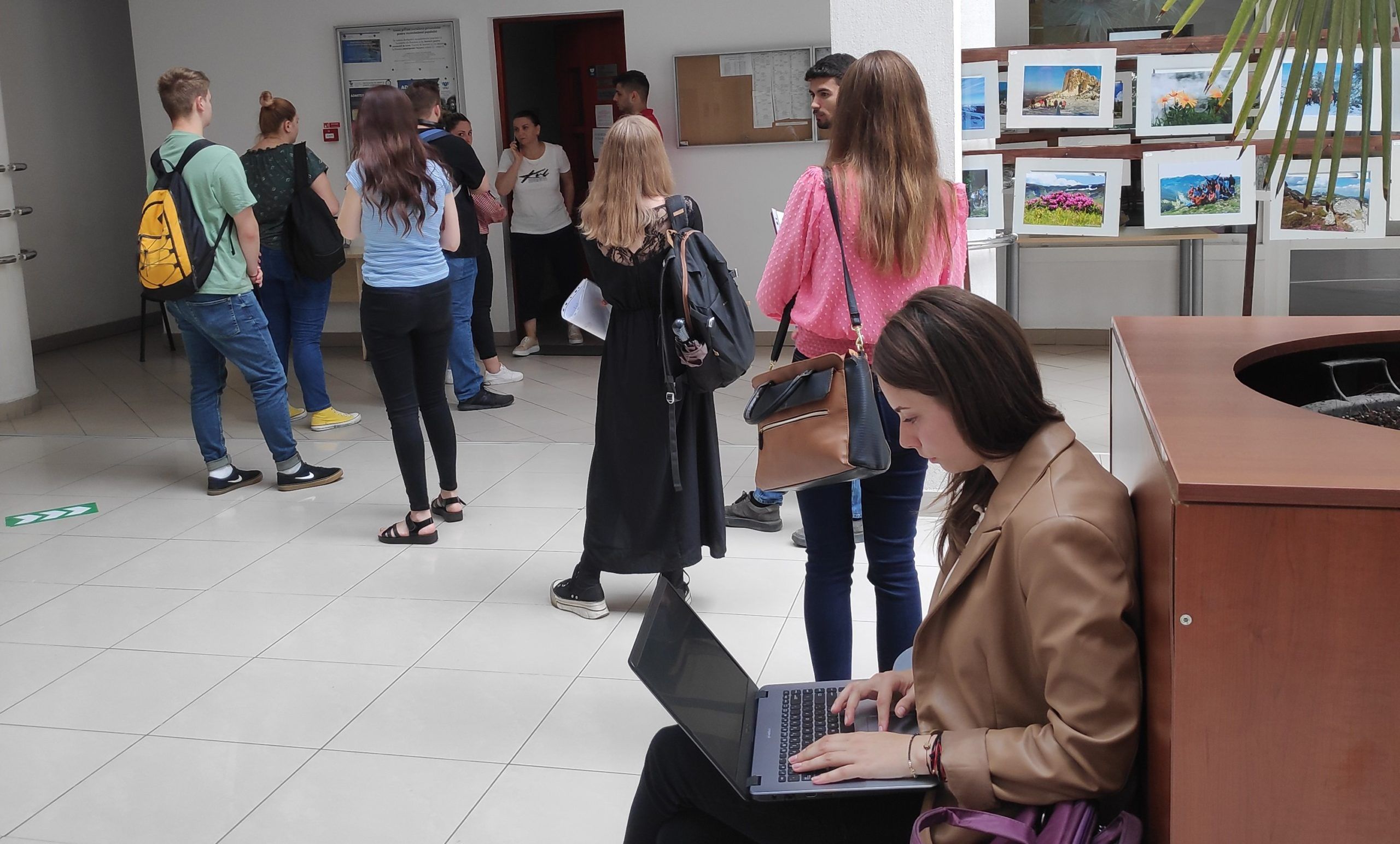 However, the anxiety about the fate of Ukrainian students cannot be hidden. It is difficult to have figures; after the first month, about half of them were scattered throughout Europe, but many have already made their journey back home. Many more are in the countryside and connected through the internet, although it’s not easy to take part in didactic activities in a beleaguered country. Unfortunately, some students are unheard of. But the determination of partner institutions is clear: their cross-border links have never been so intense, the notion at the core of partnership – “you need I help; I need you help” – has forced its way into the new reality of higher education cooperation in times of war, and it might be there to stay as the good legacy of a nightmare.