“Together with our partners, across the Mediterranean we all face the same issues regarding refugees, or about the unemployment rate of low skilled, poorly educated people. We all have common problems and we are in search of common best practices, to be adapted to our conditions.”

For a person at risk of social marginalization, an employment is often more than a job. Working is the key for a more comprehensive social inclusion that touches several spheres such as housing, education, and the access to other fundamental civil rights. This is why the project MoreThanAJob stresses the path of social and economic inclusion through the accessibility to a decent job for a vast range of people at risk of marginalization, including migrants, poorly educated or low-skilled persons, disadvantaged women, young persons out of the job market.

The driving principle of the project is that everybody should have a fair chance in life, regardless of the socio-economic condition of departure and against the economic cycles’ downturn. “As partners, what we all face is a generalized lack of coordination between local services, even in the same neighborhood. This is a systemic problem – says Iulia  Tarantino, CESIE Italy – present in all the countries and contexts involved in the project.”

The MoreThanAJob project – implemented by the ENI CBC Mediterranean Sea Basin Programme – fosters the collaboration between the so-called Social Solidarity Economy (SSE) actors, including NGOs, the non-profit sector,  those public services responsible for ensuring social inclusion, as well as the emerging world of social business and  social enterprises, the so-called “work inclusion social enterprises” (WISE). “Social enterprises are our ideal target – continues Tarantino – with their active involvement of vulnerable subjects in a perspective of job inclusion.”

Building upon pre-existent cooperation patterns, the project involves a plethora of stakeholders, from the academia to the public sector, from the private to the non-profit. All five countries participating in the project – Jordan, Palestine, Lebanon, Italy and Greece – share a similar scenario: a multifaceted negative spill-over of the economic crises, starting from 2008 onwards, and a high percentage of refugees. Around 15 million people (migrants and refugees) born in a  third country are currently living in the region and need to find a job or to enter the educational system. These people constitute the ultimate target of the project, together with other marginalized categories, including a vast portion of youth – heavily present in the region – neither in employment or in education or training (NEET). Each country, each territory is struggling now to face the same issues. By analyzing and considering differences and similarities, the project aims at joining forces and facing the problem together.

The services and opportunities delivered vary, from family and income assistance to health and counselling services,  from education, training and career guidance to employment support. Also the modality differs: if in Lebanon – a more centralized country – it is easier to involve central government bodies, in other countries, such as Italy, local autonomy has the prevalence. MoreThanAJob started in September 2019 and is currently halfway through its implementation, spinning around three different directions: the capacitation and empowerment of key actors, a broad networking both at local and cross-border level, and the policy making.

The capacitation is achieved through a programme of training and trainings-of-trainers – for SSE actors and public administrators – to enhance the capacity of public authorities to plan and implement social services. Integrated policy  approaches to social inclusion were designed during a series of seminars, focused on the role of social economy in promoting inclusion among vulnerable groups. The main scope is to create an environment where the ownership is shared among local institutions and service providers. Beyond traditional training, the workshops explored a peer-to-peer dimension towards the creation of a propitious ecosystem for the social inclusion. Also, the capacitation pushes  organisations towards a social entrepreneurial approach, stressing professionalism, management and financial sustainability. “Innovation and self-entrepreneurship are very important – says Imad Ibrik, of the An-Najah National University in Palestine – and we need new ways for both sustaining the services and creating jobs”. The empowerment of SSE actors is promoted also through the direct financial support of 200.000 € in sub-grants for the implementation of innovative initiatives in social services schemes, with the aim of making the project a catalyzer for hopefully 500 new jobs per year. Between May and June 2021, calls for subgrants to SSE actors have been launched in Greece, Palestine, Jordan and Italy.

The networking is assured also through the development of an online portal, aiming at supporting the cooperation  and dialogue between SSE actors and public administrations. “For now, the portal it is an indirect communication channel for the partnership – says Tarantino – but in perspective one of the purposes of the portal is to allow communication in English, Arabic, Italian, Greek and English because the differences in the partnership make the
exchange rich and heterogeneous.” More broadly, the portal provides access to the welfare services for the final beneficiaries on their territories and at the same time connects practices from the four countries. COVID-19  consequences and restrictions disclosed even more the cross-border potentialities of the portal. 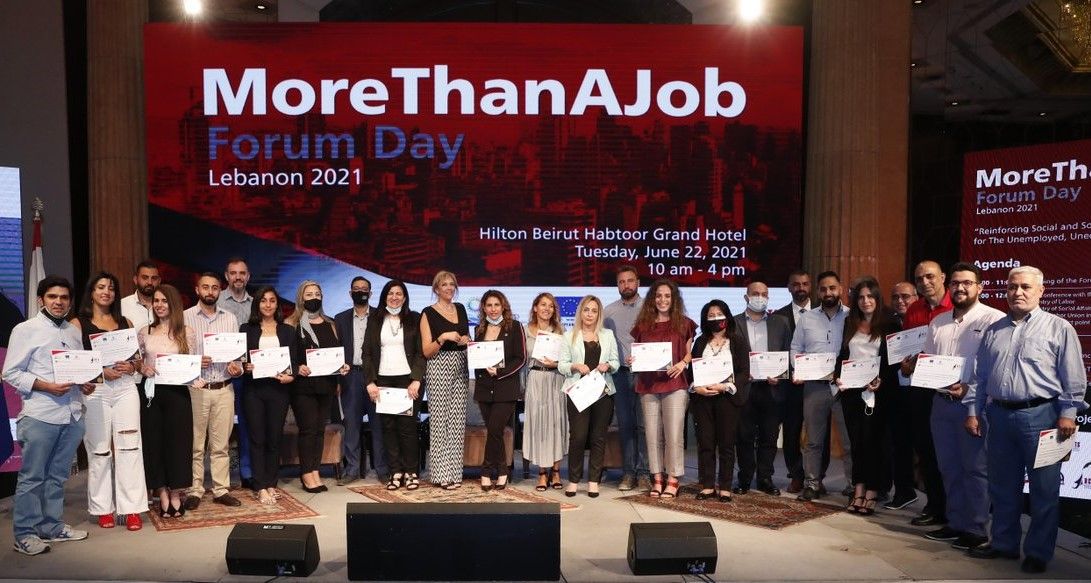 MoreThanAJob also plays an important role on policy making and institutional awareness. So far two policy briefs have been issued, describing the ways to integrate project results into future policies, and containing recommendations on how to support the socio-economic inclusions of refugees, based upon the specific experience of projects’ activities.

The COVID-19 pandemic has sharply increased the need for a portion of society to be economically and socially  included. Adjusting its workplan accordingly, MoreThanAJob plays today a role which is becoming even more  important. The persons at risk of social exclusion are growing on the two shores of the Mediterranean and the need of joining forces for a better and more integrated response is becoming a must across all the countries and territories.